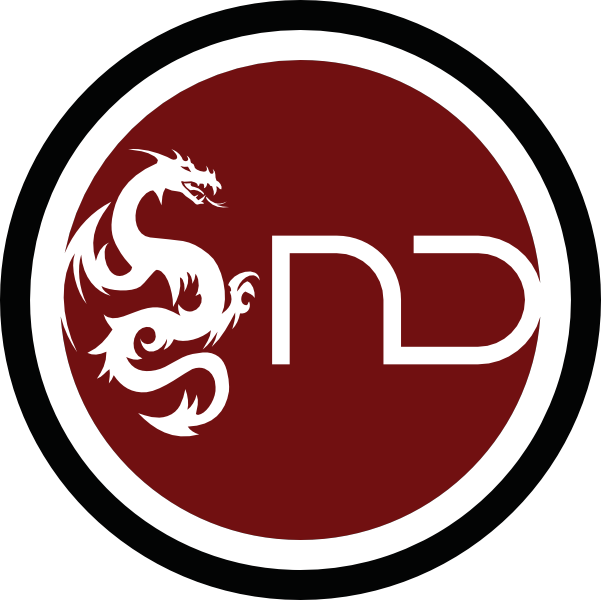 Our logo design not only represents our brand, it is also an example of how our storytelling process affects every aspect of what we do creatively.

“Nimble” represents our ability to move through projects with ease; and to quickly understand and devise the optimal solutions for every challenge our clients presents to us. The Dragon in our logo represents the “S” in Studios.  In East Asian culture, the dragon symbolizes strength, power and good luck. The “ND” represents both Nimble Dragon and the company founder’s initials whose full name means strength or guiding force in the Philippine language, Tagalog.  When read backwards in Hebrew, the “ND” reads as Koach (pron. Ko’-akh), which means strength and power. The circle symbolizes completeness, unity and perfection.  Every skill we have learned in each aspect of media in the last three decades have come full circle to a complete, unified offering of complementary services.

We believe in supporting the community who supports us so graciously.

We work with talent who not only love what they do, but is passionate about their craft.

We donate 5% of our profits to our Community Give Back Fund every month.

Applied knowledge is more powerful than knowledge alone.  We never stop learning to improve our craft.

We encourage those who work for us to volunteer some of their time to worthy causes.

Innovation is key. We don’t like ordinary.  We like to find ways to stand out so our clients stand out.

Leadership is the capacity to translate vision into reality. Nuby has a diverse creative background in the media industry.  He started his career in 1994 as a sound engineer and graphic designer.  He served as the recording and mastering engineer for The Children’s Orchestra Society for over a decade, a music education organization headed by Yo-Yo Ma’s sister, Yeou-Cheng.  In his nearly 25 years of graphic design experience he has won numerous design awards for print, web and interactive design.

Coming from a long line of musicians, Nuby is also an accomplished composer and musician.  A few of his original compositions are featured in a series of meditation CDs that have been translated into over 20 languages and continues to be heard around the world to this day, decades later.  He plays violin, piano, guitar, bass, drums and Philippine mandolin, called bandurria.

In 2004, Nuby learned every aspect of the sign manufacturing industry running the art and production department of a major sign manufacturing facility in Queens, New York.  He worked directly with architects to design and create production specifications for major building projects in the Tri-state area.

In 2007, Nuby started shadowing working professionals in the fashion photography industry and began working as a professional photographer the following year.  Over the next few years, Nuby won numerous photography awards from both regional and international print competitions.  He mentored hundreds of photographers through an on-location fashion portfolio building group he founded in 2010 called, Hudson Valley Click.

In 2011, Nuby leveraged all of his experience in design, sound engineering, photography and lighting to become a filmmaker.  Since then, he immersed himself in the world of filmmaking learning directly from some of the best cinematographers, editors, directors, sound designers and lighting technicians in the film/television industry.  Nuby’s unwavering determination to become an expert in every aspect of filmmaking earned him numerous industry awards, including several Telly Awards and Hermes Creative Awards.

Despite a busy career, Nuby still finds time to volunteer and help local organizations in the community.  He believes the only way to create change in the community is to be the change it needs.  He is a graduate of Leadership Sullivan Class of 2010, whose mission is to develop informed and committed leaders from all segments of the community who will apply their collective experience and skills to serve, strengthen and improve the quality of life for all people who live and work in Sullivan County. Jeff is a graphic designer, photographer and an award-winning cinematographer, earning himself a Silver Telly Award in his first year in the industry.  Initially coming on board as a graphic designer, he found his passion in filmmaking and quickly learned the art of cinematography.  Within a month of total immersion in the world of filmmaking, he became an integral part of the company’s production crew that continues to earn industry awards year after year.  He has been part of Nuby’s team for over 4 years, handling production and post production work for both photography and video projects for the company.

Jeff is in charge of the company’s post production team for the Magical Faerie Experience.  He oversees and trains the digital artists in the company’s proprietary process of adding the “magic” that gives the images its unique look.

In his spare time, he helps raise money for Arthrogyposis Awareness, Allyson Whitney Foundation and a variety of local community projects.

We enter our work to be judged for awards each year as a standard of excellence
for our crew to strive for because great videos get great results. This is the highest honor given by Hermes Creative Awards.  The award is a symbol of the ancient Greek messenger, Hermes, who is the Olympian god of orators and wit, of literature and poets, and invention and commerce. The Silver Telly Award is given to less than 10% of entries worldwide.  Entries are scrutinized by the Silver Council, a panel of over 200 judges who have previously achieved the Telly Awards highest honor.  We are so proud to receive our first Silver Telly within the first year of offering video production services.  Having achieved this goal gave us confirmation we were on the right track of only hiring people who are passionate about their craft. Hermes Creative is an international competition for creative professionals involved in the concept, writing and design of traditional materials, marketing and communication programs, and emerging technologies.  We were honored with two Gold Hermes Creative Awards – one for video production and one for print design. The Bronze Telly Award is given to approximately 25% of entries worldwide.  Winners represent the best work of the most respected advertising agencies, production companies, television stations, cable operators, and corporate video departments all over the world.  We are honored to have several of our projects awarded a Bronze Telly.  We expect our crew to produce this level of excellence at the very least because a well-crafted video creates a better impression. NYX Awards is the leading international awards program that recognizes, celebrates, honors excellence in marketing, communication, and creativity across all facets of industries and mediums, to advocate valuable and significant projects.